Huchehault in the 15th century 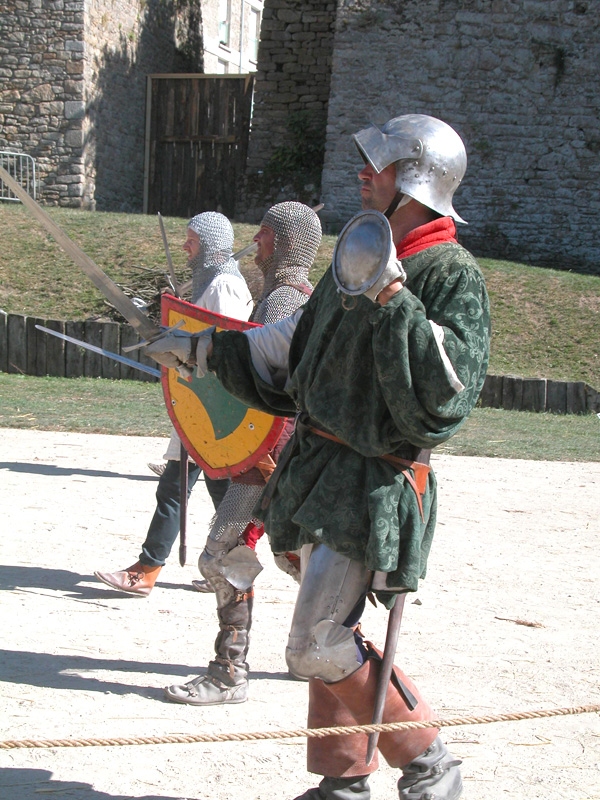 Paying the troops. (with the provost and a billman of the "Lances de Bretagne" society) (medieval event at Fort la Latte, 29-31 may 2004)

Training the billmen. (with some members of the "Lances de Bretagne" society) (medieval event at Fort la Latte, 29-31 may 2004)

Alone in front of his yellow tent, Huchehault talks about his medieval life and does not look like a very warlike squire... (medieval event in Houdan (near Paris), 14-15 june 2003)

...but give him a few Breton billmen and he will soon lead them to the training ground and to battle ! (here some members of the "Lances de Bretagne" society) (medieval event in St-Renan (Brittany), 19-20 july 2003)

Three medieval tents, and various items and accessories, recreate the atmosphere of a period encampment.

...but is arrested by the authorities ! (Dinan medieval festival, july 2002) (photo from the newspaper Ouest-France)

Guiding a tour on an historical site (battlefield of St-Aubin-du-Cormier 1488) (photo from the newspaper Ouest-France, may 2002)

Huchehault along the centuries (miscellaneous re-enactments)